Day 4 - wading through the floods 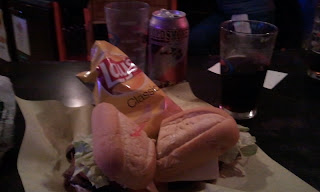 With beer at the end of it

The full Richmond Peak traverse had been dropped because of snow, but the shorter version still had plenty of the traditional carry your bike over downed trees.

I was riding back and forth with Derek B still, but stopped to snap a photo of one of the warning signs. I'd been passing them for quite a while. I heard noises off to my right in the woods and could see Derek up ahead stopping and moving to the right. He'd found the bear trap with carcass hanging inside and was stopping to take a photo. As I rode passed quickly I advised him about the noise. The planned stop for a Hostess Cherry Pie was delayed until the trap was some distance behind.

Not sure exactly where Devon took this one, appears to be somewhere North of Seeley with the signpost in the background pointing to Clearwater Lake:

But this one was in Seeley Lake trying to post my snowshoes back home. After help in boxing and taping at the outdoor/autoparts store I headed to the post office only to find it had closed at 4PM while I ate a very late lunch. I headed back tot he autoparts store and gave the man who had helped the me the very expensive set of snowshoes that by then I just wanted rid of.

I think somewhere South of Seeley Lake towards Ovando.

Arriving late in Ovando the mercantile was closed. But a warning sign on the door for Tour Divide riders advised of a re-route to the re-route because of flooding on the Ovando/Helmville road. It said to head out of town but turn on Dry Creek Rd towards the highway. GPS showed no Dry Creek Rd, just a Dry Gulch Rd. But the Mayor of Ovando was outside the Mercantile and assured the small group of riders that we'd find Dry Creek Rd just outside of town. I set off riding with Dan Simas, Caroline Soong and Derek Bentley. We never did find Dry Creek Rd, as it was Dry Gulch we should have been looking for, but the four of us had a great time riding through the flooded sections instead of the extended ride down HWY 200.

The day finished with 16miles on HWY 200 into Lincoln at 10PM. My legs felt great and I basically time trialled the road. My GPS track shows me averaging 17mph for that uphill 16 miles.

Food was just about obtained at a local bar (photo up top) with some kind hospitality again shown by the locals. With a nearby motel providing rest for the night. Unfortunately this is where things started to unravel for me race wise.