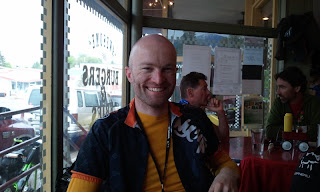 Unfortunately due to the huge amounts of snow in the Flathead River Valley we would be missing out on that part of the ride. Instead of turning toward the mountains at Fernie we would be doing the road alternative..eugh.

~110 miles after waking up I was at the American border, the crossing being the buildings on the left. It had been raining hard for a while at this point with some concerning moments when pedaling out in the open with lightning dropping within half a mile of me when I was the tallest object. Annoyingly the waterproof trousers aggravated my right knee, which has long term damage to it.

Over the border and into Eureka for some food. Rumours spread among the riders that the roads above Stryker held a 5hour+ snow hike. After food in Eureka, pushing on for a few hours towards Dickey Lake would put me close to the rumoured snow hike up above Stryker.

I don't think I've slept in many worse places, but at least it was dry and lockable so no bear concerns. Caroline and Derek took the other two, others rolling in later that evening camped nearby.