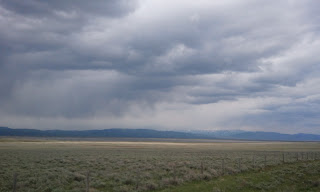 Montana is done, it didn't play nice though. 5 hours of rain to see me across the border through Red Rock Pass. So much rain I couldn't even get the camera out for the border crossing.
A tough 11 hour day, annoying to not even have y'all able to watch my blue dot wind it's way.
I did snap a photo earlier in the day to show just how desolate the valley that I did 60 miles in was. (home to the red rock national wildlife refuge)
I'm currently near Big Springs ID, optimistically hoping for Jackson, WY tomorrow. All this rain might ruin that plan though.

86 hard fought miles they were too. It was a long and desolate valley riding East from Lima. The photo below shows the kind of view I had to look at for about 8 hours. As I narrated in the small video I shot at the same time as the photo, no trees, no cows to talk to, just a powerline in the middle of no where and a "raggedy ass dirt road".

In the morning there were dark clouds all around me, I got hit by the odd quick shower, no sustained rain though. That changed as I got to the Eastern end of the valley, past the Red Rock Lakes. The rain started and the wind picked up strong enough to move me about on the road when it gusted. Coming from the South it was great to have the tail wind for the two shortest miles of the day, before I turned into it again and began the climb towards the pass. Some long slow miserable miles got me to the top, but it was raining so hard I just couldn't stop to take a photo.

Some slightly easier miles on tarmac followed before the route turned off onto forest road 455. It looked flooded and muddy as soon as I turned onto it, dirt roads don't react well to downpours when they're already surrounded by waterlogged ground. At the time I cursed the fact I'd had to turn off a tarmac road which would have taken me to the same place. I wound my way along the dirt road which was almost a stream in places. But heading along some sections I was actually enjoying the riding, particulary the descent. I might have been riding in rain for the previous 5 hours, but it was a fun road to be on after the monotony of the road I'd been on all day. I reached HWY 20 and started looking for a motel and food. I had no desire to camp in the rain if I could avoid it.

Then as I stood very soggy outside the only restaurant I discovered the racers from two days previous from Polaris were inside. I joined their table and ordered. The waitress trying to convince me that the two meals I wanted was a lot of food...ha! I think I'd eaten the spaggetti and meatballs before she'd even walked away from the table.

The petrol station had a well stocked store and cabins for rent, so stocked up on snacks for the next day, food for breakfast and a Ben and Jerrys for my desert I settled into my very cosy cabin for the night. The heat cranked up and all my gear spread about to dry.