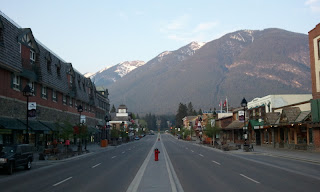 Had a great morning, killer climb this afternoon took a lot out of me late on, should cross into the USA tomorrow afternoon.
Photo was Banff main street very early Thursday morning.

It was probably the calmest, most relaxed morning before a race I've ever had. With my body clock used to waking at 5:30 Eastern, the 2 hour time difference meant I wouldn't be oversleeping. Plenty of time to get up and eat breakfast, finish any last minute bike and gear prep and then roll outsite to see what was going on.

The racers were all gathering outside the YWCA for a neutral roll out to the trailhead.

Colour coordination between my last minute snow shoe purchase and base layer was purely coincidental.

90 minutes into the ride and the views were outstanding.

The riders strung out fairly quickly. I was riding on my own, just with cursory conversations when passing people.

I was hoping for resupply at Boulton Creek Trading Post. I just had riding food with me so was hoping for at least a sandwich. Unfortunately the restaurant part was closed so resupply was just more snack/junk food.

Straight after lunch at about mile 64 the first big climb of the ride, Elk Pass. Parts of it were a muddy trudge which took about an hour to get to the top.

Looking back from where I'd come.

Initial game plan for the day had been to make it to Elkford, roughly 110 miles from the start. That's where I ended up, some great pizza and then a treat of a motel room for the night.