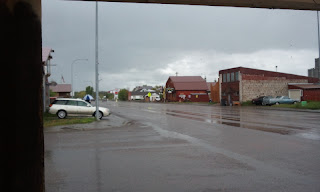 ...or lack there of.
They've been covered with clouds all day so no good view of them. I'm currently sheltering from what I hope is a passing shower in Tetonia.

Edit: currently eating in Driggs, trying to decide whether our not to go over Teton Pass today or tomorrow.

My knees and both achilles weren't happy the next morning. The left achilles wasn't moving smoothly at all.

Straight out of Big Springs the route joined a rail trail. Rail trails can be tarmac, gravel or just dirt. Any of those would have been nice. This one was 40 miles of rutted volcanic soil. This meant you had to stand and pedal the whole way to Marysville, where again the route was on a snow detour. At that point normally it turned East on Ashton-Flagg Ranch Rd and crossed the Tetons to their Eastern side. But lingering heavy snow on that pass and two others before Pinedale meant extensive re-routes were in use and the route stayed West of the Tetons before crossing Teton Pass.

The descent to Warm River was the highlight of the day.

I'd wanted to see the Tetons for several years. The best views are traditionally on their Eastern side where I wasn't going. Now I was stuck on a rutted rail trail. It didn't improve much on the other side of Marysville, more rail trail which was only really used for snowmobiles in the winter, so lots of sections required standing pedalling. I bumped into a few riders during the day, but pedalled along on my own.

Coming past what was marked on the map as the town of Felt, I think I hit my highest heart rate ever on a bicycle. Two dogs off in the distance took an interest to me as I got close to pass them. I've been chased by dogs before the TD, I'd been chased by dogs on the TD. But the one dog which I think was a Boxer was one mean SOB and it let me know in all possible terms it didn't want me there. I shifted into a high gear and made all haste to not be there. My gps track seems to show I doubled my speed to 22mph for a quarter mile at that point, it felt faster with that dog bearing down on me.

The Tetons seemed to be hiding from me. It didn't matter than the route narratives said I should be seeing them, cloud and rain seemed to be blocking my views.

I reached Tetonia and while checking the map the heavens opened. I took shelter and the photo posted at the top. I still had snacks and water so once the rain eased I moved on towards Driggs.

A pizzeria in Driggs had my name all over it. I rested up weary legged with my left achilles letting me know what it thought about the ride.